This issue was publicly disclosed on the Homebrew blog at https://brew.sh/2018/08/05/security-incident-disclosure/

Since the recent NPM, RubyGems, and Gentoo incidents, I’ve become increasingly interested, and concerned, with the potential for package managers to be used in supply chain attacks to distribute malicious software. Specifically with how the maintainers and infrastructure of these projects can be targeted as an attack vector.

On Jun 31st, I went in with the intention of seeing if I could gain access to Homebrew’s GitHub repositories. About 30 minutes later, I made my first commit to Homebrew/homebrew-core.

My initial strategy going in was based on credential theft; find if there were any credentials leaked by members of the Homebrew GitHub org.

An OSSINT tool from Michael Henriksen called gitrob makes automating this search really easy. I ran it across the Homebrew organization, but ultimately didn’t come up with anything interesting.

Next, I took a look at previously disclosed issues on https://hackerone.com/Homebrew. From there, I found that Homebrew runs a Jenkins instance that’s (intentionally) publicly exposed at https://jenkins.brew.sh.

After some digging, I noticed something interesting; builds in the “Homebrew Bottles” project were making authenticated pushes to the BrewTestBot/homebrew-core repo: 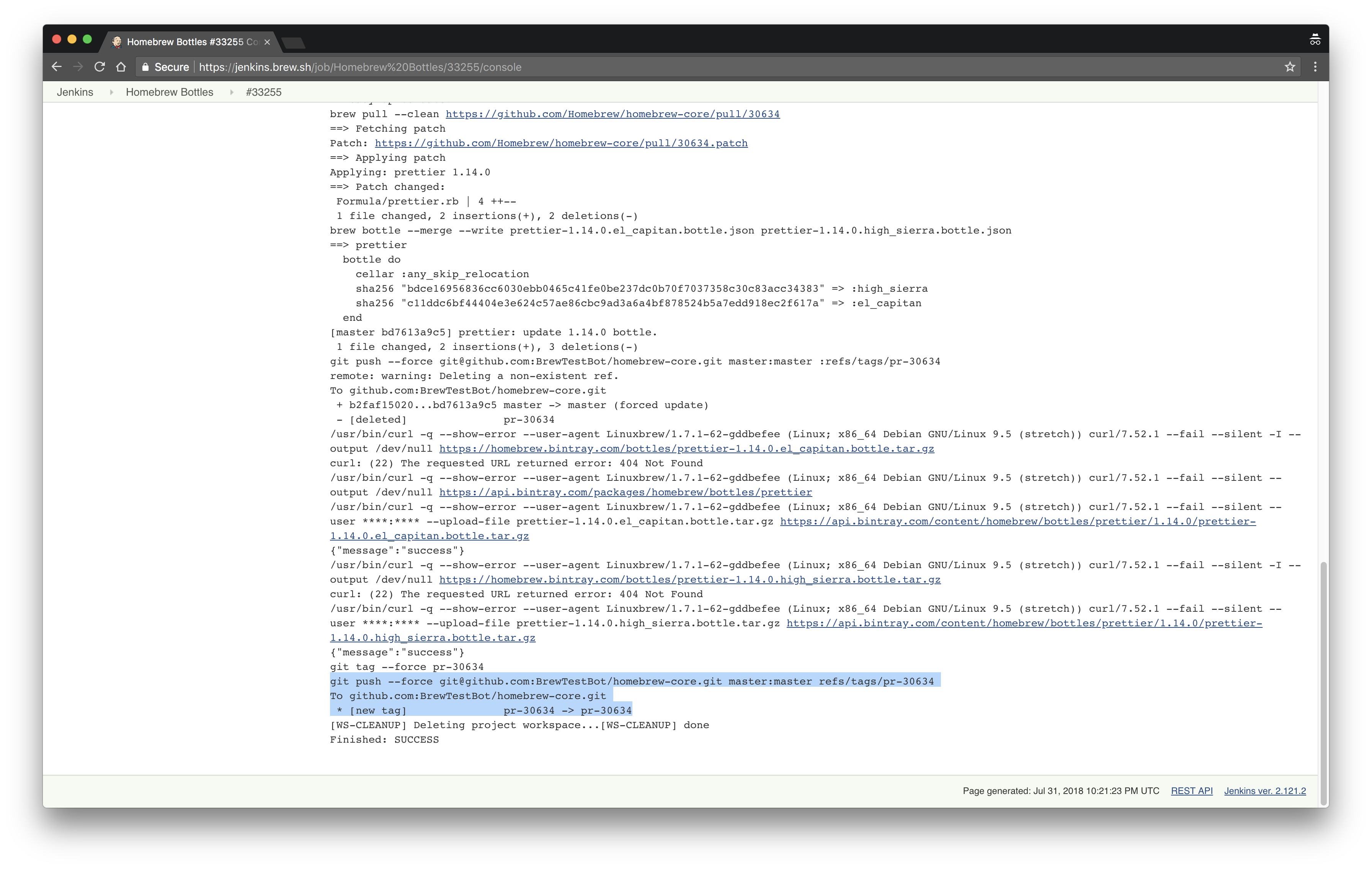 This got me thinking, “where are the credentials stored?”. I noticed the “Environment Variables” link on the left, which led to an exposed GitHub API token: 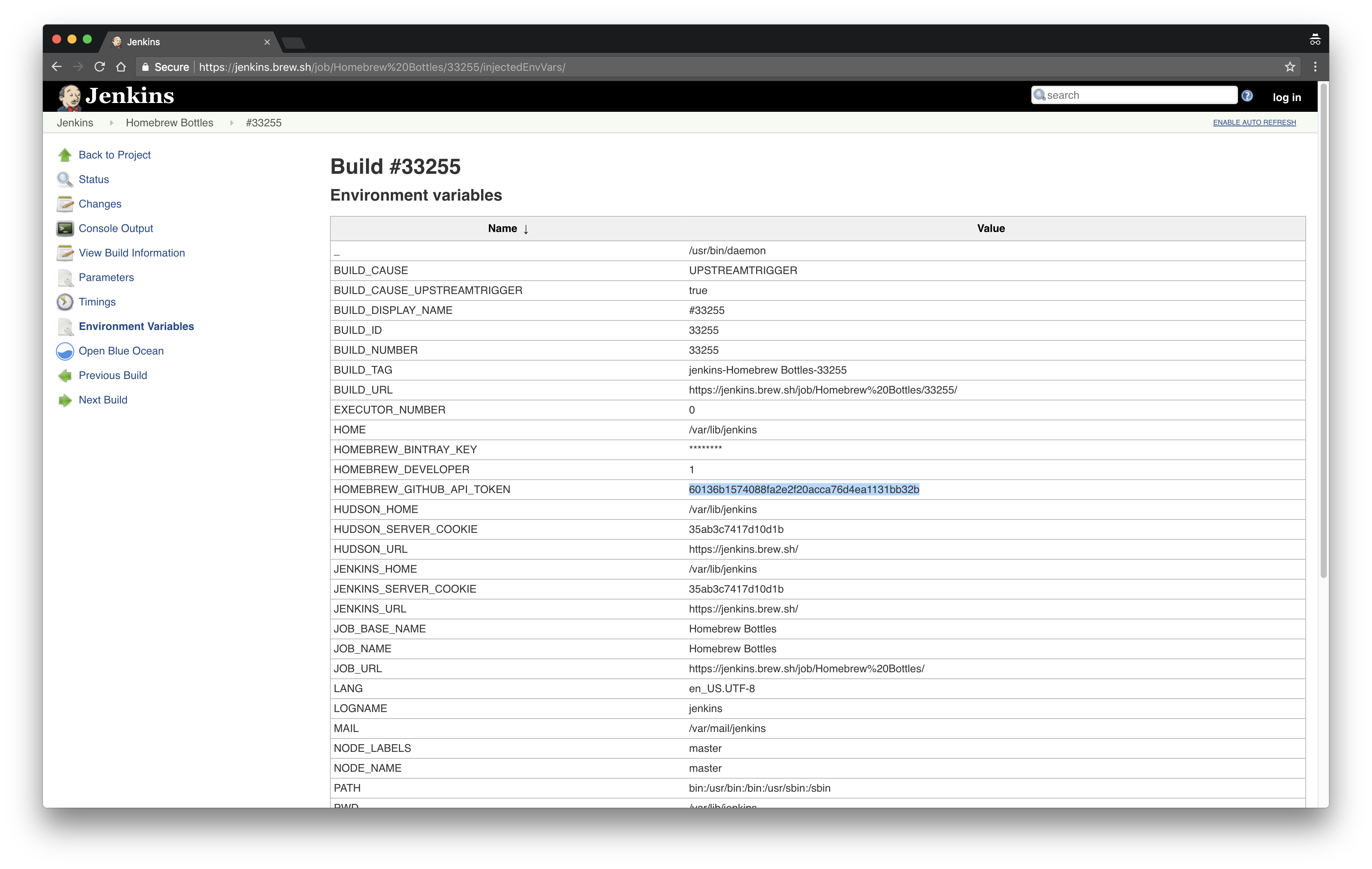 I tested it locally to see what scopes the token had:

Which suggested that I had commit access to these core Homebrew repos:

Just to make sure, I tested this by creating a blob in the Homebrew/homebrew-core repo:

And then subsequently reported the issue to the Homebrew maintainers.

Let me put this in perspective:

If I were a malicious actor, I could have made a small, likely unnoticed change to the openssl formulae, placing a backdoor on any machine that installed it.

If I can gain access to commit in 30 minutes, what could a nation-state with dedicated resources achieve against a team of 17 volunteers? How many private company networks could be accessed? How many of these could be used to escalate to large-scale data breaches? What other package management systems have similar weaknesses?

This is my growing concern, and it’s been proven time and time again that package managers, and credential leaks, are a weak point in the security of the internet, and that supply chain attacks are a real and persistent threat. This is not a weakness in Homebrew, but rather a systemic problem in the industry, and one where we need more security research.

Homebrew has publicly disclosed the issue on the blog at https://brew.sh/2018/08/05/security-incident-disclosure/. The Homebrew team worked with GitHub to audit and ensured that the given access token wasn’t used maliciously, and didn’t make any unexpected commits to the core Homebrew repos. I want to give special thanks to Mike McQuaid for his quick and professional handling of my report while on his paternity leave.

It’s clear that there’s a lot of work that could be done to improve the security of the Homebrew project. If you use Homebrew at your place of work, consider asking them to donate to the project. As an industry, we need to invest in the well being of core OSS software that we all use and depend on.